I finished my blocks and brought them over to my friend Mary's house where we discussed having it quilted or quilting it myself. The thought that I wanted to use up my fabric stash led to the idea of piecing a back and thus using my 'good' fabric for a second side. Hmmm. If I bought fabric in fat quarters, two would cover two 16" blocks. But then I don't buy fat quarters. So nevermind. But there is a serious amount of fabric in my stash that has been untouched for lo these many years. So why not begin with the idea of piecing a new top and using it for the other side (not calling it a back anymore).
The dilemma rests in making it in similar sections, thus making it easy to fit the existing blocks.
Of course I could make an entirely pieced set of blocks, just as I did with the first group, but this time in solids, which I have a ton, or in a color scheme that would easily work with my bedroom colors, and for that I have new fabric. Can you hear the wheels whirring in my brain? 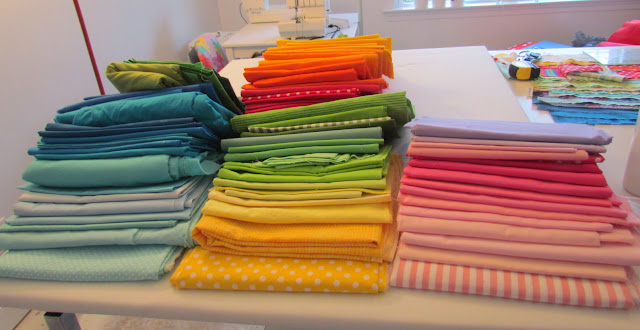 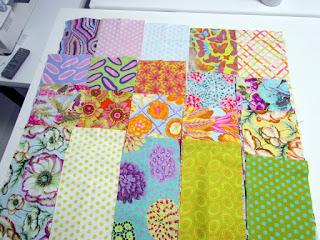 And then I have five rolls of Kaffe Fassett fabrics in six inch widths.  This is the Spring set. I think we have an idea brewing.
++++++++++
But something is stalling me... I have 36 blocks and put 16 up on the wall and that looks to me like a perfectly respectable wall quilt size. 64" square.
And, I have more than enough queen size bedcovers already, so why make another one that I can't use?
This set of 16 could be the reverse side of another wall quilt, double sided. Yup. Good idea. 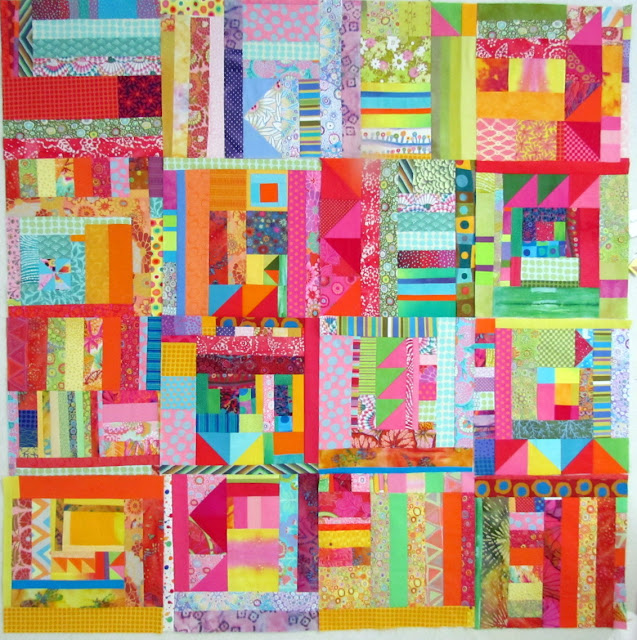 Posted by Melody Johnson at 7:34 AM

Melody Johnson
As an artist, one of my goals is to take risks, try new ideas, and find a way to give myself that 'thrill' that making art can provide. Words of encouragement are always accepted. I answer my emails faithfully, so please send me your thoughts. fibermania@gmail.com